Top Tourist Destinations in Uganda and How to Get There

Unless you are looking for Uganda honeymoon destinations that’s when you should look for town destinations but for anyone who loves adventure, you should go for tourist destinations found all over Uganda where you will experience the total hospitability with Uganda destination resort.

Sprawling across both sides of the Equator, a network of 10 national parks and several other protected areas offers wildlife enthusiasts a thrilling opportunity to experience Uganda’s biodiversity.

The mesmerizing tracts of thorn-bush savannah teeming with antelope, buffalo and elephant one tends to associate with Equatorial East Africa, lush expanses of tropical rainforest, shimmering with lakes and rivers heaving with aquatic life, and the glacial peaks of Africa’s tallest mountain range, make Uganda a Wonderland Safari destination in Africa.

Below are the top ten tourist destinations of Uganda. For a perfect Uganda safari to that can take you through these beautiful destinations.

Located in South Western Uganda occupying 331 sq km. It lies on the edge of the Western Rift valley (Albertine rift) and is shared by Kanungu, Kabale and Kisoro districts. The park occupies different vegetation zones but predominantly a tropical rain forest. This ancient rainforest is one of the few remaining forests in Africa to have flourished throughout the last Ice Age.

Bwindi is home to the great giant apes the gorilla and is the most visited park in Uganda. It’s situated in the southwest; 9 Hours drive from the capital city (Kampala). 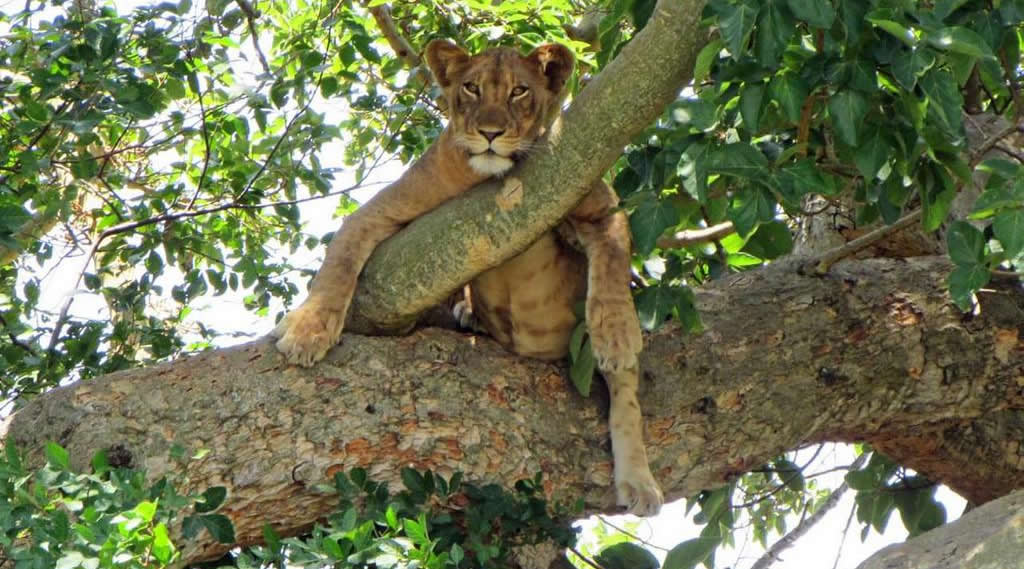 This Park derives its named from Queen Elizabeth II; the park is situated south west covering the whole of the Kazinga channel that connects Lakes Edward and George.

Set majestically in the shadow of the Rwenzori, flanking Lakes Edward and George, the lush savannah of Queen Elizabeth National park offers prime grazing to buffalo, elephant and various antelope.

The park is well-known for harboring a large number of species ranging from predators, herbivores, antelopes, birds, and other small organisms. A game drive in the park usually boosts sights of animals like the Lions, Leopard, buffaloes, elephants, Uganda kobs, bushbucks; side stripped jackals and hyenas.

A checklist of over 606 bird species testifies the extraordinary ecological diversity of this park. The Primates here include Chimps, Black and White Colobus Monkeys, Blue, Black Faced Red Colobus, and Red Tailed monkeys and Olive Baboons. 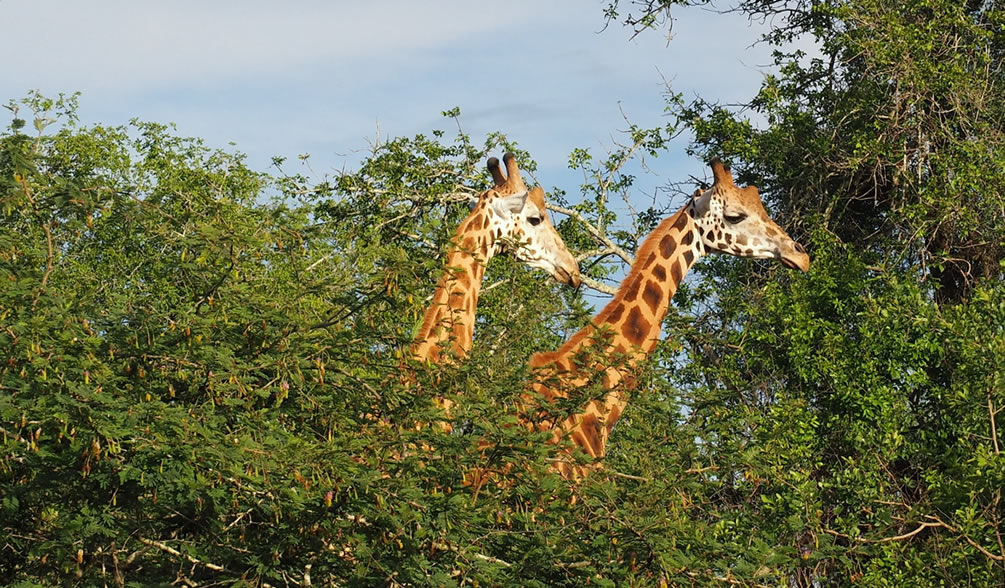 Murchison falls national park was named from the mighty Murchison Falls that are formed as a result of the Calm Nile forcing its self through a narrow gorge to explode into a thunderous roar of white waterfalls which provide an outstanding scenic view of the falls.

The park which is located in the northern end of the Albertine Rift valley is one of the oldest conversations areas in Uganda.

The park is home to a large number of animals including the giraffe, elephant, buffalo, lion, leopard, a diversity of antelopes and several birds.

While in the park you can do activities like a game drive, chimpanzee tracking and a boat ride on the Victoria Nile to the bottom of the falls is so rewarding. More on Murchison Falls National Park

The source of the Nile

Acknowledged by John Speke in 1862 as the source of the mighty River Nile, the area has not lost its scenic view and it has attracted many tourists into Uganda since then.

The Nile has a diversity of adventure to offer for tourists as the boat rides to the actual point (source), artifacts, bungee jumping, and white water rafting. More on The source of the Nile 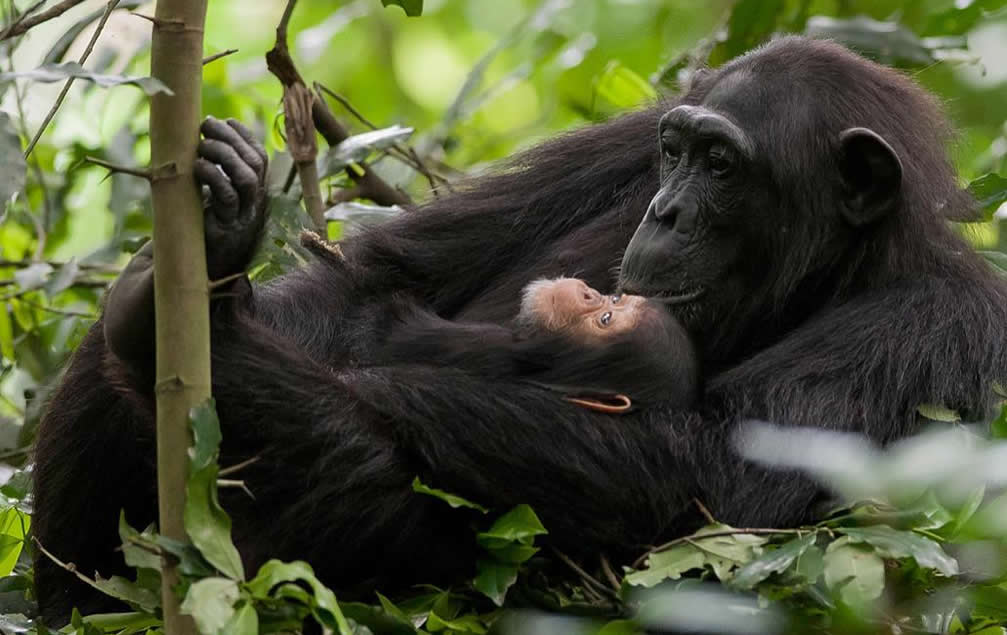 Kibale Forest National Park is located on the elevated Fort Portal plateau. It’s most known for its chimpanzee population although it harbors the largest number of primates in Uganda.

A walk through this tropical rainforest does not only reward you with primates but also with other animal species and also plenty of fauna.

Tracking chimpanzees in this forest is the most revealing and fascinating forest walk you will ever get. More on Kibale Forest National Park

The Kasubi tombs are also Top Tourist Destinations in Uganda 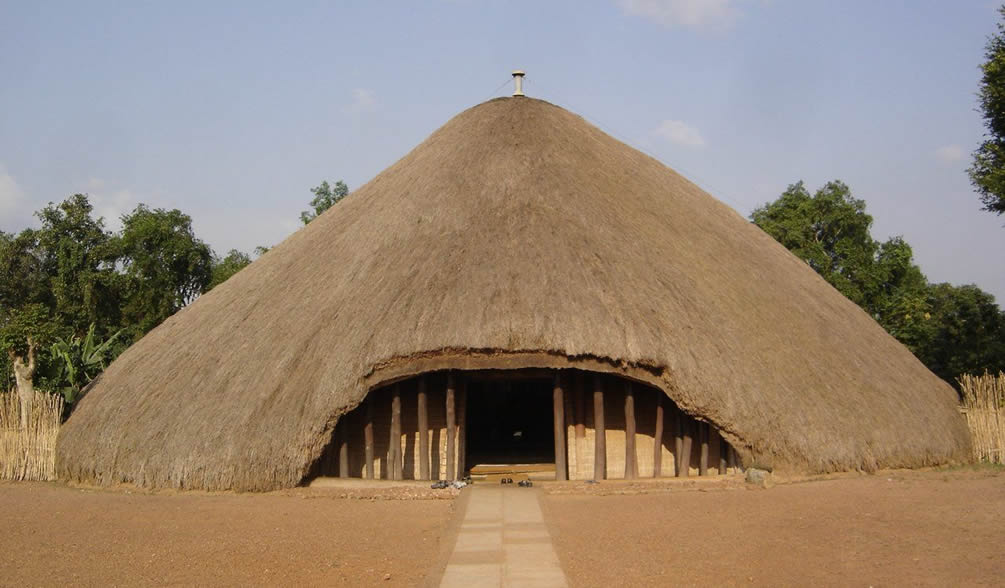 This world heritage is known to be a master piece of the Buganda cultural tradition in Uganda with one of the largest huts/Banda in the world.

Four royal tombs now lie within the “Muzibu Azaala Mpanga” (meaning “A tough one produces a Cock”), the main building, which is circular and surmounted by a dome and the main palace.

The tombs are the major spiritual center of the Baganda and its one of the most active places in the whole of the Buganda kingdom. It is located in Kampala, 10 minutes drive from the city center.

Uganda Museum as a Top Tourist Destination in Uganda 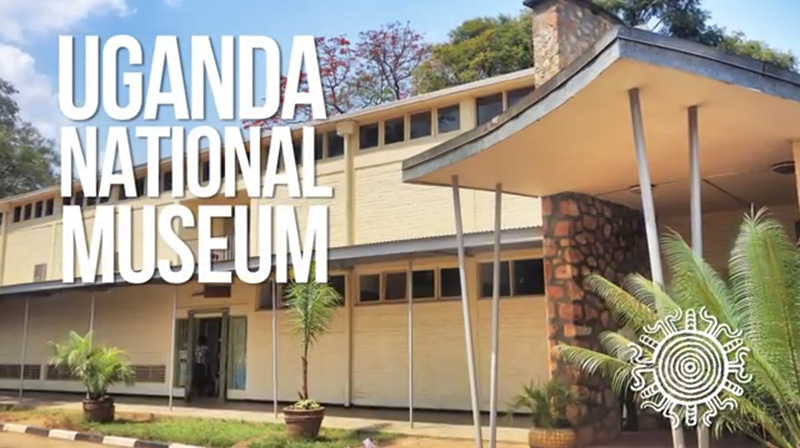 This is where Uganda’s cultural heritage is displayed and one can observe ethnological and natural-historical exhibitions.

It is a scenic reminder of the splendid past of the country with a compilation of musical instruments, photos, pictures, materials of the past.

The museum contains lots of materials starting from pre-colonial time. A visit to the museum usually gives tourists a clear picture of the past.

Ssese Islands one of Uganda’s Top Tourist Destinations in Uganda 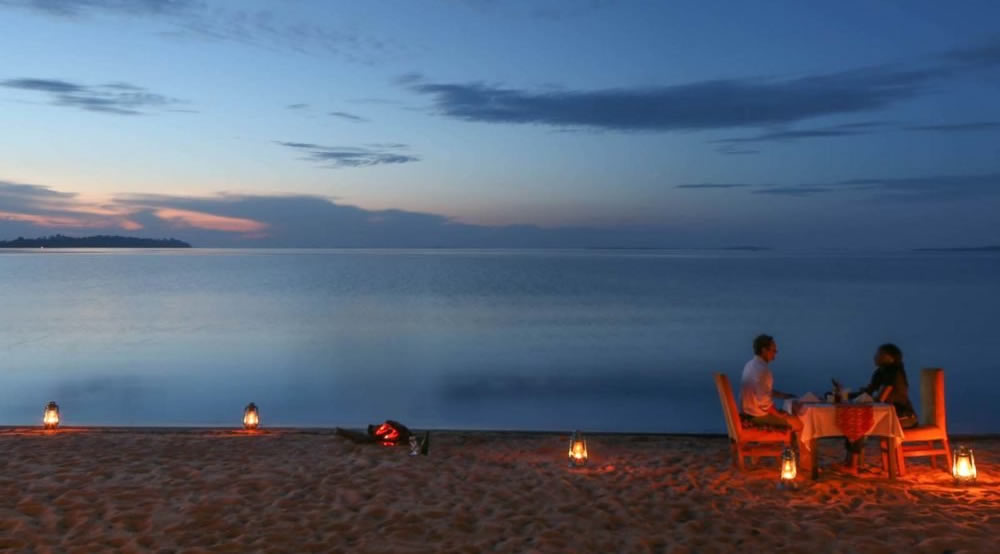 Ssese Islands are a collection of 84 attractive Islands situated in the northwestern part of Lake Victoria, the biggest freshwater lake in Africa.

These Islands are an increasingly popular tourist destination in Uganda often, described as a cross between the Hebrides and the Caribbean.

The islands offer scenic views coupled with a plenty of activities including fishing, swimming, nature walks, and other sports in addition to great relaxation. Spending a weekend on this island is regarded is many as being extremely adventurous. 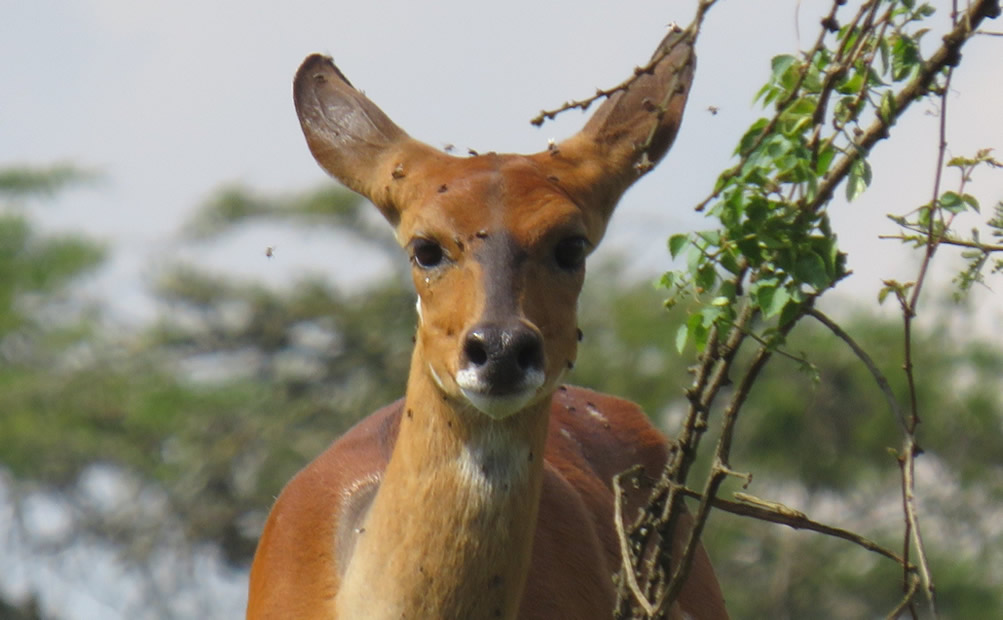 This Savanna National Park is located in Mbarara district the park is a 3 and half hours drive away from the capital city.

The park is famous for its richness in biodiversity which is attributed to the variety of micro-climates the park has.

This park is mainly known for antelopes like the Impala from which Kampala the capital city was named. It also has animal species like leopards, zebras, jackals, hyenas, buffaloes, Topis and plenty of birds.

A boat trip on Lake Mburo from which the park derives its name rewards you greatly with a view of several water birds, and lake wildlife. More on Lake Mburo National Park 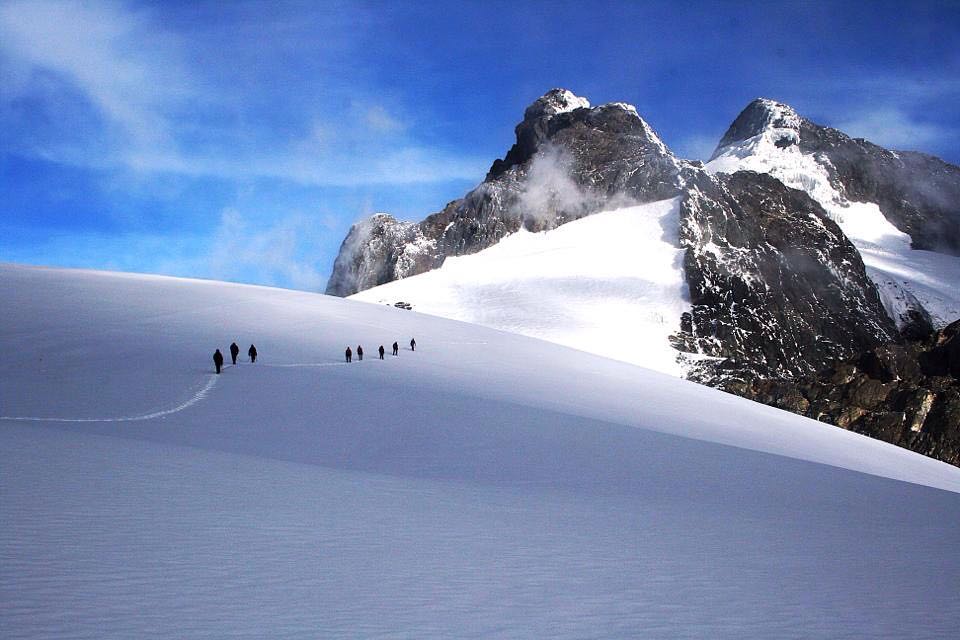 The Rwenzoris as one of the Top Tourist Destinations in Uganda, commonly to as the mountains of the moons are found a few kilometers north of the equator, rising over 4000m above the floor of the Albertine Rift Valley, is the highest mountain in Uganda.

The region’s glaciers, waterfalls, and lakes make it one of Africa’s most beautiful alpine areas. The mountains have extraordinary flora and fauna which includes Buffalo, bushbuck, chimpanzee, elephant, giant forest hog, and leopard are present although rare.

To hike the great mountains you require a minimum of seven days for a rewarding hike. However, 10 days is the best for the hike to the peak (Margherita: 5109 m). More on The Rwenzori mountains National Park

Romance on the Nile